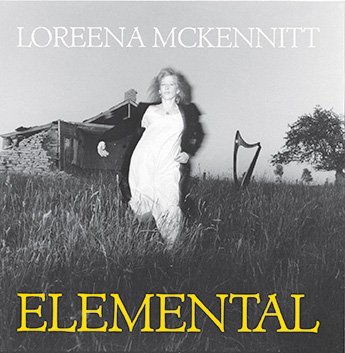 Loreena McKennitt’s debut recording and Quinlan Road’s inaugural release, Elemental, displays the artist’s first foray into the realm of Celtic music. Like all her subsequent recordings, this album was self-produced, and it was recorded one week in July, 1985 in a barn in Southern Ontario amongst a field of sunflowers.

“Celtic history would become my creative springboard”, Loreena recalls of her growing fascination with the subject. “Musically, I came to learn of, and be inspired by, many groups and artists ranging from those who authentically recreate its traditional forms to those who, like Brittany’s Alan Stivell, seek to mould it into something new and innovative.” At the time of this recording, the composer’s involvement in film and theatre would play a substantial role in the eclecticism of the material presented here.

Elemental’s nine tracks showcase McKennitt’s talents as a singer and harpist with fresh and memorable arrangements of traditional favourites, and musical settings of poems by Yeats and Blake. Its featured guests include renowned actor and folk musician Cedric Smith and esteemed Shakespearean actor Douglas Campbell.

“In 1985 I created this, my first recording, in a studio located in a barn in southern Ontario. I remember spending a glorious week in July, arising each morning on a farm, walking over to the barn and tracking the songs while gazing out on fields of sunflowers.

The songs on this recording reflect my growing interest in traditional Irish music as well as my involvement in theatre and film. Indeed I persuaded a couple of my colleagues from these fields to join me on a few tracks on this recording.

Like many around the world, I was drawn to the infectious nature of Celtic music. Having been introduced to it around 1978, I was keen to explore further . . . its history, its culture, its people. I travelled to England and Ireland several times, and took a course in Irish history before I acquired the courage to make my own musical move. Later in 1991 I would travel to Venice to attend the most extensive exhibition yet on Celtic artefacts and, as a result, this 2500 year stretch of Celtic history would become my creative springboard.

From this footing, I struck off on my own musical tangents and explorations, and in so doing, this – along with the recordings to follow – would become testaments of times of discovery and of self education; tracks in the sand, as it were. There has been no map or destination. The journey has been fuelled by an insatiable curiosity and a passion for the music, the people and the history. Just a journey. I hope it is one you will enjoy taking as well.” – Loreena McKennitt 2004