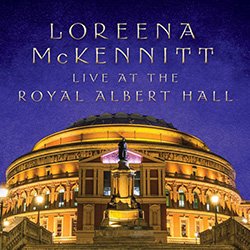 In March 2019 Loreena returned to one of the world’s most iconic venues to present a two hour concert that thrilled fans and critics alike. Live At The Royal Albert Hall is a must-own memento of both an extraordinary evening and of the Lost Souls world tour.

Live at The Royal Albert Hall is a two-disc release featuring 20 songs. It provides a substantially different collection of live songs from any of her previous live album releases. It also includes seven songs that have never been released as live tracks, six of which are from her latest album, Lost Souls. They include, ‘A Hundred Wishes’, ‘Ages Past, Ages Hence’, ‘Spanish Guitars and Night Plazas’, ‘The Ballad of the Fox Hunter’, ‘Manx Ayre’, and the title track ‘Lost Souls’. Live at the Royal Albert Hall will be released in the fall of 2019 and will be available via the Loreena McKennitt online store and selected retailers worldwide.

The performance at London’s Royal Albert Hall was part of McKennitt’s spring tour in 2019. She’d performed there 26 years earlier, opening for British musician-composer Mike Oldfield, but this time she was the main act and to celebrate the occasion she brought in five special guest musicians to join her.

“The audience was ecstatic,” wrote Liz Thomson for The Arts Desk, a British arts journalism website. Reviewing the concert, she described McKennitt’s music as “Celtic yet also Arabic, the modalities and metrics of each music perhaps more similar than is at first apparent…World Music indeed – but music which shows that the world is indeed small and that there is, as always, more that links us than sets us apart.”

Joining her for the Royal Albert performance was renowned Egyptian percussionist Hossam Ramzy, Daniel Casares, of Spain, one of the top flamenco guitarists in the world, and Canadians Ben Grossman on hurdy-gurdy, bodhran, accordion and percussion, and Ian Harper on Uilleann pipes, bombard, the Turkish clarinet, flutes and whistles. Spanish musician Ana Alcaide played nyckelharpa.

“It was a fabulous night,” says McKennitt. “It was exhilarating to have these five special guests and to perform together in such a prestigious, historic venue as The Royal Albert.”

The critically-acclaimed Lost Souls album, released in May 2018, is McKennitt’s first recording of original songs since 2006. Produced by the artist herself, it is a tapestry of songs drawn from a wide range of influences, including the Celtic and Middle Eastern ones she has long been identified with. She was accompanied on the Lost Souls Tour by fellow musicians Brian Hughes on guitars, oud and Celtic bouzouki, Caroline Lavelle on cello, Hugh Marsh on violin, Dudley Phillips on double bass and Robert Brian on drums.

Track Listing:
Bonny Portmore
All Souls Night
A Hundred Wishes
Ages Past, Ages Hence
Ballad of the Fox Hunter
Marco Polo
Spanish Guitars and Night Plazas
The Star of the County Down
Ce He Mise le Ulaingt?/ The Two Trees
The Bonny Swans
The Mystic’s Dream
Santiago
As I Roved Out
The Manx Ayre
The Lady of Shalott
The Mummers’ Dance
The Old Ways
Lost Souls
Tango To Evora
Dante’s Prayer