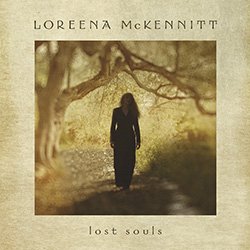 I chose to collect and complete this poesy of songs being reminded of the maze of days when they were born.

Upon listening, I reflect on the many hours spent with a glorious feast of musicians, deep in the beauty of the English Wiltshire countryside.

Some of these songs were begun years ago. At times, they have felt like Lost Souls, not having found a home on any of my previous recordings. Like unexpected travellers, they appeared on the path of previous journeys. While some of these songs have no direct connection to my pursuit of the history of the Celts, they are eager to find a resting place nonetheless. Like the hymn Amazing Grace, ‘I once was lost, but now am found’.

I think of a vagabond, who when wandering the street late at night, was stopped by a policeman and asked why he was out so late, to which he replied, “if I knew the answer to that question I would have been home hours ago.”

Perhaps we are not lost, just taking a long time returning home.

SPANISH GUITARS AND NIGHT PLAZAS
The first part of this piece came into being while I was working on The Visit in 1990. Images of sensual evenings spent in plazas in Spain and the Mediterranean seemed to be burned into my mind, enriched with the aroma of jasmine

A HUNDRED WISHES
There are those who leave on journeys and those who are left behind. In whatever way separation manifests itself, it is comforting to remember the time spent with a loved one creating memories. This is another song I wrote during the same era as The Visit.

AGES PAST AGES HENCE
Ancient peoples, be they the Norse or the Celts, instinctively knew their lives were closely interwoven with the company of trees. Not only did they provide and protect the necessities of life by way of air and water, they were also the habitat for other living creatures. The Hidden Life of Trees, by Peter Wohlleben, suggests that trees have a rich inner life of their own, while Ronald Wright’s A Short History of Progress, argues that the damage done to the earth’s forests may historically be one of our greatest sins.

THE BALLAD OF THE FOX HUNTER
Not only have I always had a dog, I have spent much time marvelling at the special and unique relationships shared by many different species. This poem by W.B. Yeats, which I set to music somewhere in the late 1980s, seems to capture some of that special connection.

MANX AYRE
In my earliest days of busking, this was one of the pieces I would perform during my 15-minute set. I gathered it in Winnipeg, Canada during my early years of connecting with Celtic music.

LA BELLE DAME SANS MERCI
Struck by the imagery of this poem, the longing and the mystery, I sought to put it to music in 2006 while working on An Ancient Muse.

SUN, MOON and STARS
Turn towards the rising sun at the mountain, walk for five days and you will find the oasis by a big rock.’ Such were the directions of desert nomads. Or the songs lines of the indigenous people of Australia. The celestial and physical worlds have long provided the reference points for our navigation. Partially inspired by a Moldavian folk melody, this song is a tribute to that ancient knowledge.

BREAKING OF THE SWORD
The inspiration for this piece came to me during a visit to the Canadian National Vimy Memorial in France while reflecting on all who had perished there. In this song, I am reminded that all families mourn the loss of their loved one, and that loss transcends borders, cultures and time itself. The soldier’s family mourns, the military ‘family’ mourns, and so does the community from which the soldier came.

LOST SOULS
It is inevitable during one’s life to reflect on where we have come from, what we have done and where we are headed. Whenever one journey ends, another begins and we know not where it will lead. Are we lost souls to an unknown destiny, or simply part of a greater journey than we