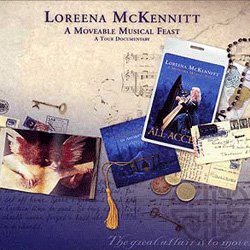 A Moveable Musical Feast features 25 minutes of previously unreleased musical performances. From a vantage point even better than a front-row seat, we join Loreena and her musicians centre stage.

A Moveable Musical Feast is a unique souvenir of Loreena McKennitt’s 2007 An Ancient Muse tour and offers a rare backstage look at one of contemporary music’s most interesting live performers. Through candid interviews with Loreena, her band, crew, fans and professional colleagues from the Canadian music industry, we gain insight into her career, work ethic and the artistry that has been the foundation of her remarkable musical journey. Loreena and her fellow travellers entertain us with stories of how her show ‘goes up’, discuss the joys and challenges of their nomadic life when ‘on the road’ and share their thoughts on the creative relationships they have with each other, the music and the audience.

A Moveable Musical Feast features 25 minutes of previously unreleased musical performances. From a vantage point even better than a front-row seat, we join Loreena and her musicians centre stage and observe the musical alchemy first-hand as they perform “The Highwayman”, “Never-Ending Road (Amhrán Duit)” and “The Gates of Istanbul”.

There are so many roads and so many journeys – the long and winding road, a road to nowhere, the road less travelled – many have been celebrated in song and in verse. For travelling musicians, life on the road holds its own ephemeral images of voyage and discovery.

In a long-honoured tradition, itinerant minstrels moved through the landscape using carts, carriages and portable stage platforms. Now we modern nomads roam the world in buses, trucks and planes.

The themes are always the same. From “Where are we and what is there new to see and learn?” to “What is there to eat?” We are all too familiar with the trundling on the highways and byways through the middle of the night, with lights flashing and a sign that says we are only 2,000 miles from our destination.

I have invited my fellow travellers and musical companions to sit around the table with us and share their voices, as it was with those tales that knew a thousand and one nights.

In the end, we seek to deliver a musical experience that in many ways resembles a lovingly prepared meal. Of course we would like to think it a feast, but that is not for us to say. What I do know is that the music is not complete until we have broken bread together.

Welcome to our table! Partake of our journey. LM

“The Gates Of Istanbul”
Music and Lyric by Loreena McKennitt

From the Quinlan Road CD The Visit
“Between The Shadows”

From the Quinlan Road CD Elemental
“Come By The Hills”
All songs written and/or arranged by Loreena McKennitt. All songs are copyright throughout the world by Quinlan Road Music Ltd.

How to Make and Sell Your Own Recording book jacket courtesy of the author, Diane Rapaport

Michael Till and Peter Williams
Archives

A Moveable Musical Feast is a unique souvenir of Loreena McKennitt’s 2007 An Ancient Muse tour and offers a rare backstage look at one of contemporary music’s most interesting live performers.