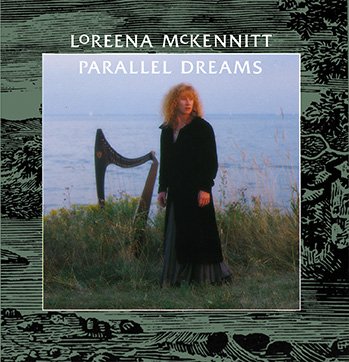 Features McKennitt’s own original compositions along with her interpretations of traditional material. One of the most successful independently-released Canadian albums ever.

One of the most successful independent releases ever in McKennitt’s native Canada, the self-produced 1989 album Parallel Dreams is also her first recording to feature the artist’s own lyrical contributions. From the poignant traditional ballad “Annachie Gordon” to the fiery Native American/Celtic fusion of “Huron ‘Beltane’ Fire Dance” to the evocative tale of a child’s yearning for home in “Dickens’ Dublin (The Palace)”, Loreena’s third recording shows a marked evolution beyond the realm of traditional Celtic music and heads down the road on an eclectic musical journey.

“Beyond the transportation into fantasy, dreams have served as a vehicle through which we have integrated our conscious and subconscious, the real and the surreal, the powerful and the intangible.

The dreams found in this recording span a wide range from the contemporary to the historical, as in the Romeo and Juliet story of Jeannie and her lover in “Annachie Gordon”, the singular as in the little Dublin street girl who dreams of having a home, to the plural in those who dream of freedom as reflected in “Breaking The Silence”, or the earth’s yearning for release from the oppression of the human hand in “Ancient Pines”. In the “Huron ‘Beltane’ Fire Dance”, I have tried to recall the reverence for dreams of the North American first peoples and the early Celts. If there is a recurrent thread that runs through these dreams, it is one of yearning toward love, liberty and integration. Of all the variations of dreams we may have, these surely are our parallel dreams.” – L.M.

Features McKennitt’s own original compositions along with her interpretations of traditional material. One of the most successful independently-released Canadian albums ever.