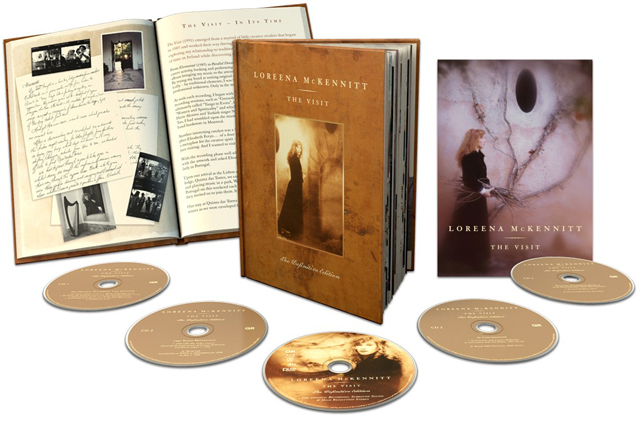 The album that propelled Loreena onto the international stage 30 years ago and has since sold more than two million copies worldwide will be released later this month as The Visit: The Definitive Edition, available in a 5-disc deluxe book format including the first surround mixes of Loreena’s music.

This enhanced anniversary release will appeal to the average listener, as well as the most advanced audiophiles among us. Either way, it’s a sound experience unlike any of her previous albums.

The deluxe-limited-edition boxed package contains four CDs and one audio Blu-ray disc, a 32-page illustrated booklet and five hours of previously unreleased content – including the first surround sound mixes of Loreena’s music. The Blu-ray disc includes two surround sound versions and a hi-res stereo version. Dolby-Atmos surround sound represents the latest technology and is akin to what you’d experience in a modern cinema. The Blu-ray disc works on a Blu-ray player, but also on a regular computer with an optical drive as long as the listener has Blu-ray player software. The high-resolution version allows you to enjoy the original stereo mix in a format that comes closes to the original stereo studio masters.

The fourth compact disc includes binaural headphone mixes of the complete album, plus six trio performances from The Visit recorded live on tour in the United States. Binaural mixes provide listeners with a dynamic experience similar to surround sound, but through stereo headphones.

The anniversary release is also available as a 15-track digital highlights edition, which includes a 24-bit remastering of the original album, plus six additional live recordings selected from the 19 previously-unreleased performances included in the limited-edition box set. The digital version is available exclusively through streaming and download services.

After years of concern about the relative poor quality of streaming and download service, we at Quinlan Road – like so many others – are thrilled that all the major streaming services (including Apple and Spotify) have moved towards a much-improved listening experience. Back in 1982 when CDs were first introduced (almost 40 years ago!), manufacturers promised listeners ‘pure, perfect sound forever’. While this was how most of Loreena’s listeners would have first experienced her rich vocals and the unique instrumental tones, streaming services are increasingly moving towards high-definition audio experiences.

Leading the charge are such HD “lossless” services as Qobuz (available in 11 European countries) and Tidal (covering 60 nations worldwide). All of Loreena’s releases since The Journey So Far are available through these lossless services, and the remainder of her catalogue will soon be added.