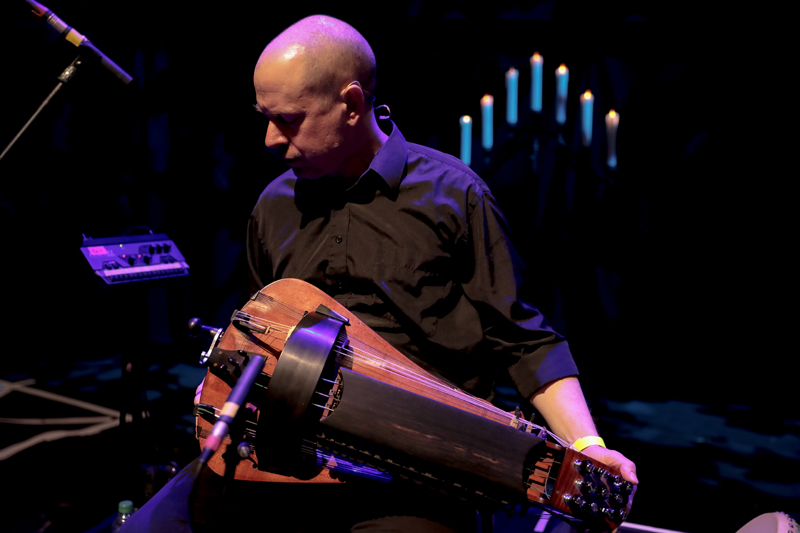 By Diane Sewell, for The Loreena McKennitt Community

He agrees that diversity is his strength. Known as an improviser, studio musician, composer, noisemaker and audio artist, Ben Grossman’s career has taken him in multiple musical directions, as well as on journeys to Turkey, France and Austria in pursuit of knowledge and technique.

In addition to playing on six of Loreena’s albums, beginning with An Ancient Muse in 2006 and most recently on Live At The Royal Albert Hall in 2019, he’s toured with her numerous times in North America, Europe and the Mediterranean.

During his decades-long career he’s played on over 100 CDs and dozens of soundtracks for film and television. He’s done sound design for theatre, installations and radio transmissions, not to mention live performances spanning early medieval music to experimental electronica.

“I absolutely love what I do,” he says, “even though it’s difficult at times and it’s definitely challenging. It’s two jobs – at least. It’s challenging to function and make a living in a culture that has a limited perspective on the value of art.” In North American culture especially, the first thing people tend to ask when they find out he’s a musician is, “oh, are you in a band?” – to which he usually answers, “I’m in a bunch of bands”.

Ben is a gifted, versatile and experimental musician, playing guitar, accordion, percussion, the bodran, and of course hurdy gurdy, the instrument he’s undoubtedly been most known for the past 15 years. It’s an exotic string instrument with a hand-cranked wheel which rubs against the strings, thought to be a medieval relative of the fiddle originating in Europe or the Middle East. Despite its ancient history, Ben’s adoption of the hurdy gurdy has primarily been focused on contemporary ways of playing it.

His uncle is a blues and rock guitarist and his mother was “a folk strummer,” so not surprisingly music came naturally to him. He went to a series of art schools over the years, in some cases places where instructors were working artists, many of whom became valued mentors. With a well-groomed reputation as a versatile, talented and experimental musician, his film, TV and session work has helped keep him afloat during the lean COVID years. The father of two daughters has called Guelph, Canada his home base for the past 15 years.

Ben first met Loreena in 1997 in Turkey by way of coincidence. He was in Istanbul studying music and Loreena was there scouting out a video location. A mutual friend who helped her book a boat to go down the Bosporus straight asked if another Canadian friend, who also in Istanbul, could come along. That friend was Ben. “We met on the dock and spent the next few hours toodling up and down the river.” But it wasn’t until about 2004 that the first in a long series of musical alliances began.

Working with Loreena, says Ben, has definitely been one of the highlights of his career. “It’s fair to say that every iteration of Loreena’s band that I’ve been a part of – well, I can’t imagine a better group of people to work with and spend time with. They’re all incredible musicians and you really become a family of sorts while you’re on the road. Part of her vision has to do with bringing these varied musical voices together and it’s a really beautiful thing.”

“I love working with Ben. He’s a really interesting individual with eclectic tastes and interests, which fit well into my music,” says Loreena. “In particular, his hurdy-gurdy playing is a welcome addition in the fabric of instruments and arrangements. It’s quite a versatile instrument in itself, with its melodic, drone and rhythmic functions, all of which can go on at the same time. This takes unbelievable skill and concentration. His ability to integrate so many cross-cultural influences is evidence of his great talent. More hurdy-gurdy I say!”

Another highlight of Ben’s accomplished career was being invited at the 1999 Calgary Folk Festival to be part of the pick-up band for Gil Scott-Heron, the late American soul and jazz poet best known as a spoken word performer on social issues during the ‘70s and ‘80s. “To me, he was just such a hero, particularly politically and culturally,” says Ben.

Continually learning and always evolving, Ben light-heartedly cites a saying in the music business that basically translates to ‘always strive to be the worst player in the room’. “That just means,” he explains, “that it’s best to work with people who can teach you something. And I have such admiration for all the people I’ve been fortunate enough to play with.”