Accomplished musician/producer has worked with Loreena for 34 years 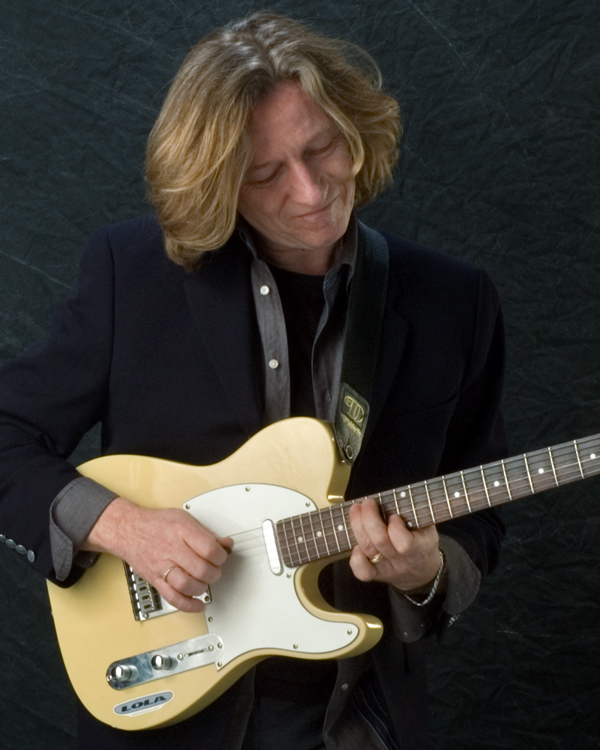 When Brian Hughes first met and performed with Loreena at a Toronto concert in 1987 little did either of them know they were embarking on a magical musical journey that would take them all over the world and into the creative depths of 13 albums.

Brian has played on all Loreena’s records, except the first two, and been in supporting roles as assistant or co-producer, bringing the various musical and technical elements together to facilitate her vision for each song. In 1992, when Loreena was nominated for a Juno Award as producer on The Visit, Brian was also nominated as co-producer for his work on the album. He also mixed her 2012 Grammy-nominated Troubadours on the Rhine.

The Visit won a Juno Award for Best Roots & Traditional Album and is the recording that propelled Loreena onto the international stage.

An accomplished guitarist/composer/producer, Brian has been described as “unclassifiable” and “genre busting”. He has built a successful career of his own, recording nine jazz albums, most of them released under his own record label Sylvan House Music and available through his website. Over the years, he’s earned a string of accolades, including winning SOCAN’s Jazz and Instrumental Composer of the Year Award seven times. “It’s really great when you get acknowledged – it’s a little notch in your belt, but then you move on,” he says.

So where did it all start?

“I was around 14 or 15 and I was only dabbling in guitar really. I’d be walking home from school having these fantasies about being on stage in Edmonton or Vancouver playing for 20,000 people. I guess it kinda worked out,” he laughs.

Born in Alberta, Canada, Brian moved to Los Angeles in 2000 to pursue opportunities in the robust jazz community there. Through the decades his music has been influenced by everyone from Bob Dylan, Eric Clapton and Jimi Hendrix to Talking Heads and jazz great Wes Montgomery. When he was a teenager, his friend’s sister was into Celtic music and that’s where he heard it first. “When I did that 15-minute section of the Toronto concert with Loreena in 1987 as soon as she started playing I knew all the parts would come together, that I could move my jazz and rock sensibility into the music.”

Brian’s main instrument is guitar, but he also plays the oud, bouzouki and the balalaika. He has toured with The Chieftains, produced and mixed international platinum-selling albums for several prominent Greek recording artists, appeared with Loreena on The Late Show with David Letterman, and the title track from his album Shakin’ Not Stirred was featured in an episode of the popular television series Sex and the City.

Brian has also joined creative forces with two other long-standing members of Loreena’s band: cellist/singer Caroline Lavelle and violinist Hugh Marsh in a project dubbed Secret Sky. Four years ago, they released their first CD by the same name. Despite living in three different countries, they were able to stitch together the music remotely thanks to Brian’s production skills, the advancements in home recording technology and as Brian puts it, “with a lot of back and forthing”. He describes the album as having “the passionate feel reminiscent of some of the expansive, filmic albums of the ‘70s”. To the layperson, it may seem like a strange way to make a record, but it’s become increasingly common and easier to produce.

“With Loreena’s albums we had the luxury of all being in the same room. That way, you have the opportunity to pick up on the vibes of other musicians and work off each other,” says Brian. “But both ways have their benefits.”

Now, with The Visit: The Definitive Edition, Brian is looking back 30 years to the time of the original recording in 1991. Three decades is a long time and he admits his brain is “a bit fuzzy”, but there are some things that are etched in his memory.

His girlfriend at the time, Pamela (now his wife of 27 years), had an apartment in Toronto back then where her brother’s balalaika hung on the wall. He’d won it as a prize for best costume on a cruise when he was 12 (dressed as a chicken). One day while working on The Visit, Brian took the balalaika off the wall and started playing. When Loreena heard the instrument, she felt it belonged in the musical imagery of “The Lady of Shalott”, and so it made its way into the recording.

“They were pretty intense studio sessions and we were at it every day,” recalls Brian. “Loreena’s more of a morning person and I’m more of an evening person, but it all worked out. The sessions were a lot of fun. We were big on textures and ambient sounds and we had these wonderful tribal drum sounds, Middle Eastern percussion and great fiddling.”

Loreena has her own special memories from the time and of working with Brian. “It’s been great to have Brian’s support all these years, in the studio and on the road. In addition to being able to travel the world while performing, we’ve also had some great times, great meals and some really great laughs. I remember one time when we were recording at Real World Studios and I was auditioning musicians. Out of fun, I put little coloured dots on my forehead and I would add to them as the day went on. Before each of the musicians would come in to play for me, Brian would mention to them that I had this odd fascination with putting dots on my forehead. But he cautioned them to please, whatever they do, don’t say anything when they met me. The musician would politely come into the studio and we’d work with them playing a few tracks, all the while suspecting how whacky they must have thought I was. When the day was over, we had a great laugh over how considerate and respectful everyone had been, though likely privately wondering ‘what was up with her’!”

Brian too has some funny memories from The Visit. “I can remember Loreena saying to me, ‘Brian, give me a drag of your cigarette’, then it would go to her head and she’d have to lie down on the sofa for 20 minutes.”

These days, Brian and his wife Pamela divide their time between L.A. and their hacienda in Mexico. Since the pandemic put the kibosh on live performances of all kinds, they’ve been working on their place in Mexico and “doing a lot of dog walking”.

And of course, he’s dreaming again of performing in front of thousands of people someday soon.

Brian Hughes Best Of on Spotify