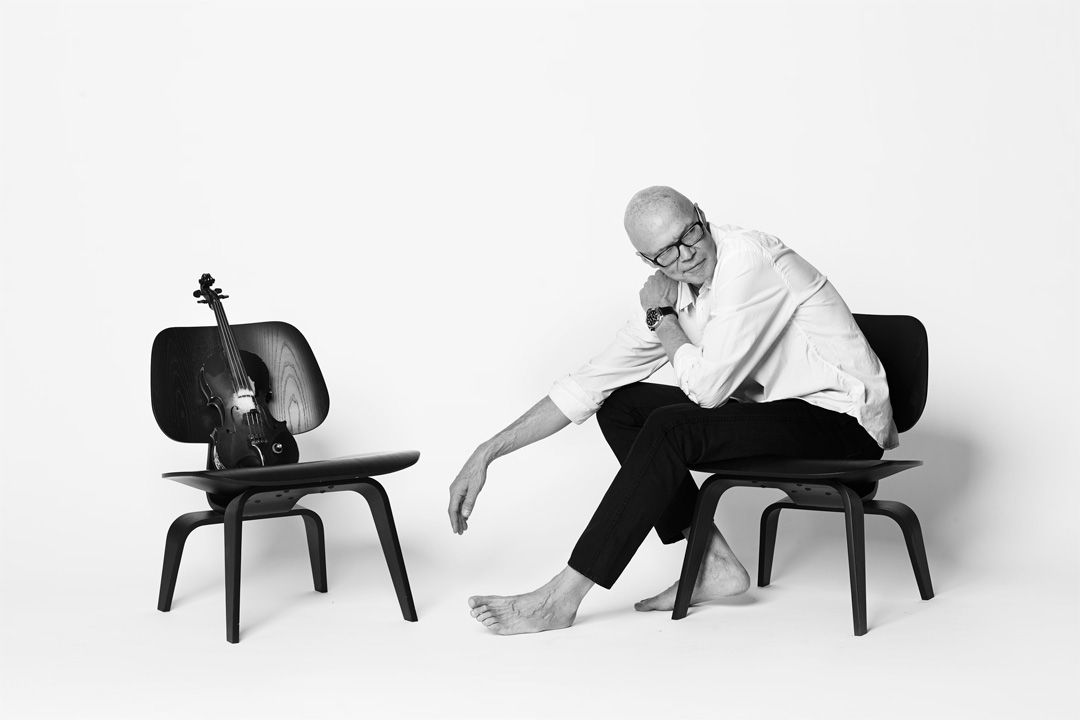 Hugh Marsh has been playing the violin for most of his life. And he’s been pushing the boundaries of what it can do for almost as long. He’s been described as ‘a sound poet’ and ‘a sound bender’, but he prefers to call himself ‘a musical conversationalist’.

He explains it this way. “I think of myself as more of a side man, as somebody who is there to serve other people’s music,” he says modestly. “Hopefully, I can bring something to it that’s my own, something reciprocal.”

Despite his humility, Hugh, who has been a core member of Loreena’s band since her original recording of The Visit in 1991, is a versatile, highly-accomplished violinist with six of his own albums and an impressively long list of artistic accomplishments, punctuated with his still-evolving experimental techniques. He is undeniably a force unto himself.

In 2007, he was nominated for a Juno Award in the Best Contemporary Jazz Album category for his recording Hugmars. He’s a four-time winner of the Jazz Report Award, a three-time winner of the Canadian National Jazz Awards for Fiddle/Violin Player of the Year, and has been nominated for a Canadian Screen Award in Film Scoring. He’s played on over 250 albums and performed with some of the biggest names in the music industry. His unique musical ‘voice’ extends into the film world where he has been electric violin soloist on the scores of such blockbusters as Armageddon, The Lion, The Witch and the Wardrobe, The DaVinci Code, Away From Her, Gone Baby Gone, and Shrek 2.  Over the years, he’s worked on 35 movie scores with Harry Gregson-Williams, one of the most sought-after composers in Hollywood.

Hugh’s fascination with the violin began when he was just five years old. He was living in London, Canada at the time and every Saturday he’d go grocery shopping with his parents. Next to the grocery store was a music shop and it was there that he spotted a quarter-size violin on display. He was besotted. Week after week he’d stand on his tip toes and peer through the window longingly. Eventually his parents bought the tiny instrument and shortly thereafter his 13 years of classical training in violin began. His parents were themselves interested a range of musical genres and encouraged their son’s interest. As a child, his father had sung in a Vaughan Williams choir (the composer and conductor considered by many to be the most influential musician of his generation). His mother dabbled in piano, playing by ear, and she and Hugh would regularly perform duets at home.

“My parents invested a lot of time and education in my classical training. It laid a strong technical foundation for me, which was really great,” he says. “I guess I could have ended up in an orchestra somewhere.”

But we know that’s not how it turned out.

A high school music program and a gift from his father changed everything. Well, almost everything.

It was at “a very arts-forward” high school in Ottawa where Hugh was introduced to the saxophone by an encouraging music teacher, which in turn exposed him to other genres of music, from R&B to jazz. But the real fork in the road arrived the day he came home from school and found his father had bought him an amplifier, an acoustic pickup and a wah wah pedal. “My dad had recognized I was at a bit of a musical crossroads,” Hugh told a New Renaissance Magazine journalist. “Even though I had a lot more chops on the violin I was truly considering dropping it altogether in order to concentrate on the saxophone. I was playing alto and tenor in a rock bank at the time and looked upon the violin as a bit of a wimp instrument. That all changed the moment I plugged in.”

Currently living in Toronto, he’s also been a member of the Toronto-based band The Rheostatics since 2015 and is part of the Secret Sky trio alongside cellist Caroline Lavelle and guitarist Brian Hughes, other long-time members of Loreena’s band.

In fact, it was Brian who introduced Hugh to Loreena roughly 30 years ago. Hugh was initially hired to play on one song during the recording of The Visit, but he ended up playing on four. He has since accompanied Loreena at hundreds of concerts and on numerous of world tours, most recently her 2019 Lost Souls Tour.  Over the years, those tours have taken him to some spectacular and exotic venues and exposed him to new artists, including three memorable Greek musicians, Sokratis Sinopoulos, Haig Yazdjian and Panos Dimitrakopoulos. The trio joined the band at the Acropolis and at the Alhambra concert in Spain, which was later released as Nights From The Alhambra, a live album and DVD.

Working with Loreena, Hugh points out, is very different than working on film scores, where he is often called upon to “create sounds nobody has heard before” and which usually involves a lot more technology. Playing with Loreena, he says, “is more about creating lush clouds of sound.”

The diversity of instruments and cultural influences in Loreena’s music is highly appealing to Hugh. “I love that she brings in musicians from all over the world.  It’s fantastic that she has the flexibility to do that. We’ve also performed at so many spectacularly beautiful places. You can feel the past lives that have been there before you in these Greek and Roman amphitheatres. The interaction with other musicians from around the world, who play at such a very high level, is so rewarding. But I think one of my favourite things is the camaraderie of everyone on the road.”

“It’s been so amazing working with Hugh over the years,” says Loreena. “He brings such an interesting dimension to our creative adventures, whether it be in the studio or on tour. One aspect of his own creative impulse is connected to his work in film. He has this ability to interpret the imagery I often speak of, creating and manifesting that into sound – and remarkably all with his violin.  And of course, like the other members of the band, he is such a great travelling companion.”

Hugh knows the violin intrinsically, and is so adept at manipulating it through past, present and emerging technologies that he can make sounds that both defy and stretch the imagination. His 2019 solo recording, Violinvocations, is a case in point. “Every sound on that recording is violin – even if it sounds like drums. It’s really an amalgamation of everything I do – from the film work, to my job as improviser.” Hugh calls the tracks on the album, not songs, but “tone poems”. “I like speaking a lot of different languages inside music,” he confides.

Interested in “everything to do with the arts”, Hugh also dabbles in photography, movie making and design. He says if music hadn’t chosen him, he might have gone into architecture.

When reminded that he’s been called “Canada’s leading improvising violinist”, he bristles slightly. “I’m not a fan of that quote and I certainly wouldn’t say that,” he challenges. “There are no ‘leading’ or ‘best’. There are voices. To be recognized as, ‘hey, I think that’s Hugh Marsh playing’ – that’s far more gratifying.”