The unforgettable times I met the Queen

The unforgettable times I met the Queen 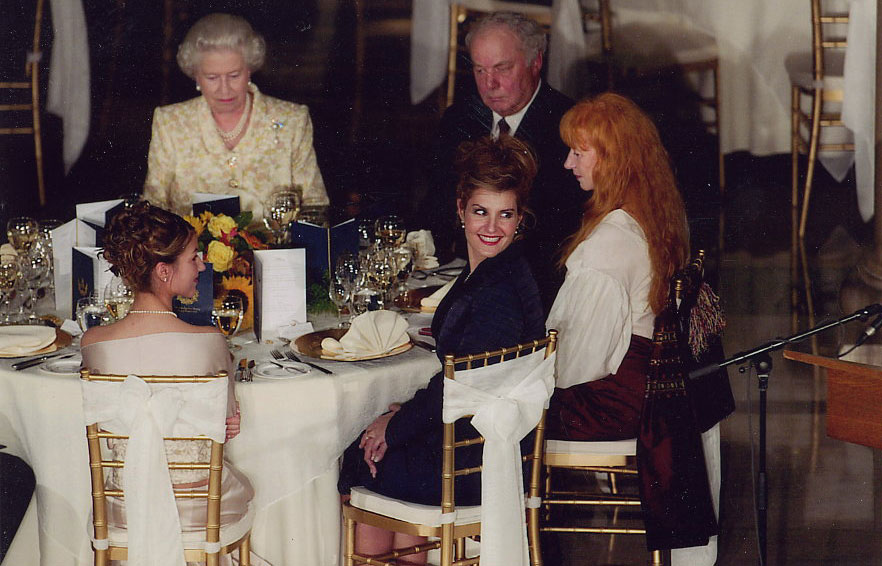 From left, Queen Elizabeth II, former Canadian Gov-Gen. Edward Schreyer and actor Nia Vardalos at a Manitoba dinner reception for the Queen in 2012.

It was in 1970 when I found myself tagging along with my older brother, who was a Boy Scout at the time, to a gathering at Riding Mountain Park in Manitoba to meet ‘The Queen’. This was Queen Elizabeth II of course, and I remember being in a crowd of people and being captured in a photo by the Winnipeg Free Press standing next to her with my two long red-haired braids. Astounded by the moment of serendipity and with a photo for all to see, I was mesmerized by that moment and looked at the photo (now lost) for years to come. Never did I think that an even more consequential occasion would come some years down the line.

In the year of the Queen’s 2002 Golden Jubilee (during which I was awarded a Jubilee medal), I was invited to go back to my home province of Manitoba to perform for Her Majesty and incredibly, dine with her and other guests in the Legislative Building, behind the stage where I had just performed.  I remember there being a very short period of time between the end of my performance and being ushered into dinner. I had just sat down when once again the Winnipeg Free Press was there for the photo you see here. Inbetween Her Majesty and I was former Governor General Edward Schreyer. To my left was Nia Vardalos, the star of the movie My Big Fat Greek Wedding.

That dinner was, as one could imagine, an other-worldly experience and in some respects it went too fast. But as many others have testified since her passing, I found Her Majesty to be an empathetic, interested and interesting person who could put people at ease. She reached out to each of us to briefly learn more about our thoughts and lives and at times turned the conversation toward her own life and thoughts, including her son (now King Charles) and his interest in organic farming.

Since her passing, I have reflected long on her, the era in which she lived, the qualities which made her so special and their relevance today – decency, tolerance and a life of service. She once said, “It is not enough to do our job. Service demands sacrifice.” She was steadfast, dedicated and loyal, and whatever place the Royal Family will continue to have in our lives, these are qualities I think we can all appreciate. Especially in these times.