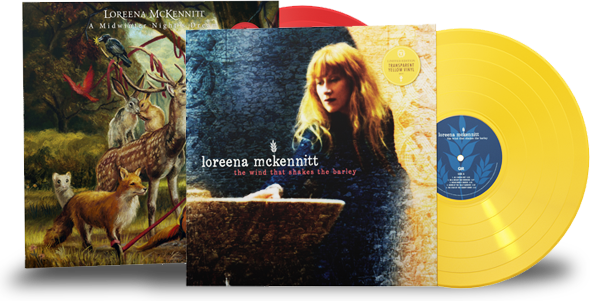 Loreena is releasing two of her albums on coloured vinyl for the first time and they’re available for pre-order today through her online artist’s store.

The Wind That Shakes The Barley is being re-issued in a 140g transparent yellow edition with the original artwork, available beginning Oct. 7 through Loreena’s website and assorted retail stores. It’s been 12 years since the album was released as 180g black vinyl, limited edition of 5,000 pressings, which have long since sold out.

The album was originally recorded in the summer of 2010 at the architecturally celebrated 1830s Sharon Temple north of Toronto. Made of wood it’s known for its exceptional acoustics. For Loreena, the album represented a return to traditional Irish and Scottish music and her earliest inspirations – the age-old music that is the foundation of her musical career and her debut recording Elemental in 1985.

“I was inspired and encouraged by many of my friends and fans who asked that I record traditional material once again,” explained Loreena at the time. “It has been like ‘touching the stone’ going back to the roots of my initial deep affection for Celtic music.”

This transparent yellow album features the same traditional classics as the original recording, including ‘Down by the Sally Gardens’, ‘The Star of the County Down’ and ‘The Parting Glass’, as well as lesser-known songs like ‘The Death of Queen Jane’ and ‘As I Roved Out’. Accompanying musicians are violinist Hugh Marsh, cellist Caroline Lavelle, guitarist Brian Hughes and hurdy-gurdy player Ben Grossman.

If you love vinyl you’re not alone. In 2021, vinyl sales in the UK were the highest they’ve been in 30 years, according to the British Phonographic Industry. Meanwhile, the Recording Industry Association of America reported vinyl sales increased in 2021 for the 15th consecutive year.

A Midwinter Night’s Dream is the other album Loreena is re-issuing. This time it’s a 140g transparent red edition that includes original artwork and a four-page booklet with sleeve notes and lyrics. It’s also available Oct. 7th through her website and in various retail stores. This 2008 Christmas recording was first released in 2016 as 180g black vinyl, with a limited edition of 5,000 copies – which has also long since sold out.

“Like all of McKennitt’s material, these songs gorgeously blend folk traditions from around the world (with an emphasis on the Irish and Scottish), seasoned with a sizable dose of literate universalist mysticism, and undistractingly garnished with a shimmering, glossy modern pop polish,” wrote Darryl Cater, from All Music Guide, in his review of her 1995 recording, A Winter’s Garden. The five songs on that album were later combined with eight additional seasonal favourites to become A Midwinter Night’s Dream.